My piece in Newsweek: No Sacred Space

The Kingdom of Saudi Arabia is undergoing its third round of municipal elections. The first round was held in 2005 to much fanfare, whilst the second was slated for 2009 but in fact delayed until 2011. Women were excluded in those first two municipal elections. The participation of women only became possible this third time around, after a royal decree by Saudi’s previous ruling monarch, King Abdullah.

With the exception of the inclusion of women, these elections faced a great deal of apathy, mainly because they are elections for municipalities that only concern urban development. Some see it as a distraction from demanding basic rights and more influential political participation. Others believe that these elections are held mainly for international media consumption to improve Saudi’s image abroad. Moreover, the elections are only for two-thirds of local council seats while the other third, as well as the head of the municipality…

In Islam and the Qur’an: The Queen of Sheba

There are several different accounts of the Queen of Sheba–in Islam, Judaism, Christianity, and I suspect in religions and cultures outside of these–for she was an extraordinarily intelligent and open-minded queen regnant, who ruled by her own right a flourishing kingdom with expansive international trade, exceptional agriculture, highly advanced irrigation systems, enormous water dams, and architecture of complex and breath-taking design. Oh, and magic.

Rumor has it that she also kind of got a kick out of invading other lands and constantly winning with her practically unconquerable army.

Despite the assertions of Muslim men that women should not be any type of leader, the Qur’an not only gives us the Queen of Sheba as an example of a powerful and successful ruler but also praises her individuality, intelligence, and politics. In fact, while some make the claim that the Queen married…

The random musings of a 1973 Original

Description:This is no longer Heinlein’s Nerdom. The white-skinned, flowing haired Damsel in Distress is more likely to be the dark-skinned, kinky haired Reluctant Hero. The chiseled, blue-eyed avatar is more likely to have brown eyes and rounded features. As the Geekverse grows, so do representations of black women within it. Unfortunately, black women still face many barriers towards being accepted as “real nerds.” Our discussion will focus on the past, present and future of the black nerd girl and her place in the ‘Verse.

It’s Okay to Have Flaws (Except for You): Steven Universe and Fandom

Let it all out…

Steven Universe’s occasional homages to Revolutionary Girl Utena are starting to feel less like cute nods to a beloved nerd thing and more like an earned, legitimate comparison: both shows feature a patchwork of complicated interpersonal relationships and great care for their very well written characters, deal with complex and emotionally charged thematic issues through heavy use of abstraction and symbolism (never forget Utena aired in a primetime slot), and are unafraid of letting their characters seem unsympathetic in the name of developing them.

Shadae Schmidt (aka Dae Dae) was a 32-year old African-American woman who died of a heart attack last Thursday, March 13th, 2014 at CIW prison (east of LA). We suspect her death is

due to medical negligence because she had been asking for medical help for weeks. On February 3, 2014, Shadae had a stroke and within 2 weeks she was returned back to a cell in the solitary confinement unit (SHU) where she was still in active recovery. Upon her return, she was given medication that she repeatedly told medical staff was making her very sick. Her complaints fell on deaf ears and prison staff continued giving her the same medication which we believe led to her death on March 13th.

Shadae’s death is a terrible tragedy and one that happens far too often in California prisons because of severe medical neglect. We are asking for as many people…

“The phone rang. It was my college rapist.”

They said they do not want Carl (and or anyone protecting him now) incriminated, but I cannot help but feel that something must be done directly about this.

I will support Fusion Comics I will continue to volunteer. I will support Men Can Stop Rape and share this with TWIB Nation (because it seems right up their alley), but still.

This is beyond the real folk blues. This is more than a red wedding. This is a night of chimera’s cry. TRIGGER WARNING and SOS.

What more can we do? About this case? To change the reality where Carl ever get the idea in their head that…

Dear Students, and whom ever else it may concern,

Continuing on with Nerdy But Flirty‘s Black History Month special articles, today, I bring you an interesting, yet almost taboo, topic amongst anime and manga fans alike:

The portrayal of black characters in anime.

Contrary to popular belief, the rising of more black (read: not “dark skinned”) anime characters grows higher with every new anime that is released and every new manga that is penned. All though finding reputable black characters in anime seems a little difficult.

“What does she mean by ‘reputable’?”

Well, that should be obvious enough: I’m talking about characters that do not, in any way, portray that idiot-ass stereotype of a character with jet-black skin and huge red lips that take up half their face. And, of course, if you’re a Dragonball fan, or, yes, even a Pokémon fan, then these two characters pop straight into your mind: 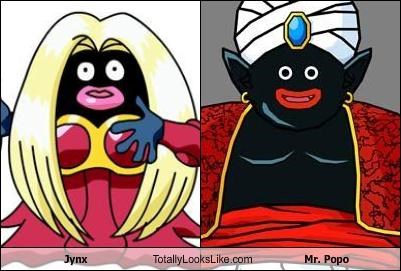 None other than Mr. Popo and…

The Portrayal of Black People in Manga and Anime

I have been a big fan of Manga and Anime for as long as I can remember. I always admired how the Japanese style of drawing cartoon characters was different from that of popular western comics and animations. The characters in Manga and Anime have always stood out because they are unique. That is, many of them have exaggerated and flamboyant features and this always stood out for me and many other fans alike. Never did it ever occur to me that the way the Japanese creators illustrate their artistic work had significance on how race and ethnicity is viewed or construed in Japan.

As I began to read and watch more Manga and Anime, I began to notice how non-Japanese characters (people of color, specifically of African origin) were drawn and represented and many of them had very stereotypical characteristics. This can be seen in their…

Bo Jensen is a Danish scholar in the history of prostitution; several years ago he was commissioned by a sex worker group to study the size of the Danish sex industry in order to counter prohibitionist propaganda that the industry was “rapidly growing”.  Regular readers know I’m skeptical about low estimates of the fraction of men who buy sex, but Jensen makes a reasonable case for his 3% regular client figure (about half of my usual estimate) if one assumes that the relatively low number of sex workers and high turnover estimate are also correct.

I have experienced a fair amount of trolling in my day. The trolling has occurred in my Twitter mentions, on Facebook, by email, in comment boxes, in paper mail, in voicemails, on blogs, and by call-ins to television and radio programs on which I have been a guest. It has been directed at me personally and organizations I’ve been affiliated with. Garbage like this can come with the territory when you’re a feminist, and especially when you’re a woman on the Internet.

At its most garden variety, the trolling is a never-ending stream of comments on my sluttiness, my stupidity, and my appearance. The trolls can’t decide if I’m super ugly, or hot and have good “jugs.” The focus is never my actual appearance so much as baldly sexist attempts to reduce my worth to my appearance. Ah, and how could I forget — I am an advocate for reproductive health, rights, and justice…